It was 1967 and I was a junior in high school, hanging out at the music store after school, trying to learn that slippery instrument called the electric guitar. Across the street sat a record shop, a narrow sliver of a building with a record player in the back where the regulars could listen to LPs before buying them.

Decades before I would create the character of guitarist Hayden Quinn in Born Under a Bad Sign, I pushed aside the curtain that divided the rooms and heard a sound that set my head on fire. Nothing—not Cream, not the Who, not the Yardbirds—prepared me for that assault of Jimi Hendrix. The drums roared, the bass thundered, and the guitar cried with an agony and rage I never could have imagined.

And then there were the lyrics.

“I have only one burning desire,” Hendrix sang. “Let me stand next to your fire.”

With Noel Redding on bass and Mitch Mitchell on drums, the Jimi Hendrix Experience blazed onto the scene with 11 songs on “Are You Experienced” that spoke of the distorted reality of love, confusion and mania.

At that time, the market was dominated by the swirling studio work of the Beatles’ “Sgt. Pepper’s Lonely Hearts Club Band,” the cheerful vocals of the 5th Dimension’s “Up, Up and Away” and the jazz organ of Jimmy Smith. Hendrix arrived like the Big Bad Wolf, blowing away our rigid notions of pop music like a house of straw.

He played like a man possessed. Unlike anyone before him, and unlike few after—Joe Satriani, B.B. King and the late Roy Buchannan come to mind—Hendrix made the guitar sing. He made it weep. He let it cry out in joy and pain.

His image became as outlandish as his music.

Hendrix mimicked the tortured soul of Vietnam-obsessed America during his Woodstock rendition of “The Star-Spangled Banner.” He played louder than loud as he jacked into a wall of amps, picked a Stratocaster with his teeth and set his axe on fire, wailing away in headband and psychedelic clothes.

Assessing his influence has been difficult, although books by Mitchell and Redding have helped. There have been many packages of Hendrix’s hits. Some have offered us a solid look at his fierce style, like Ryko’s “Radio One.” Some have smacked of exploitation. Others, like the four-disc “Lifelines, The Jimi Hendrix Story,” attempt through interviews and excerpts to shed light on that unquenchable fire.

Fifty years after he brought down the curtain on Woodstock, Hendrix remains the benchmark. He is to rockers what Charlie Parker is to jazz, a musician’s musician who shattered boundaries few could even see. Born in Seattle in 1942, Hendrix’s flame burned short but fierce.

He got his first guitar after his father returned to the projects one day to find his son wailing away on a broomstick. After a stint in the Army, Jimi rose from obscure backup guitarist for the Isley Brothers to rock’s standard-bearer. Three years after he exploded onto the pop scene, on Sept. 18, 1970, he died in his London apartment.

For those of us who struggled to learn his moves, his leads proved fascinating and difficult. Each time I played the war whoops that begin “Purple Haze” I felt the soul of a man consumed by demons. Here was a mortal creating the most liberating music I’d ever heard. We tried to copy it but we never found the cool spot at the center of the flame.

The closest I’ve come is with the music of Hayden Quinn, a tribute to the scorching work of the original.

Hendrix died a lifetime ago, but his music still burns. Fifty years after I first heard you, Jimi, I have only one burning desire: let me stand next to your fire.

Born Under a Bad Sign is available through bookstores and online at Amazon, Apple Books, Barnes & Noble and Kobo. 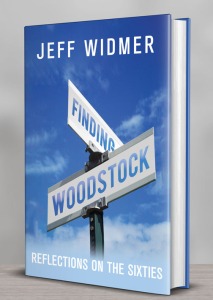 Finding Woodstock is a personal reflection on a decade that changed many of our lives—the Sixties. A companion to the novel Born Under a Bad Sign, the collection of short essays provides the backstory to a generation that is still trying, in the words of Joni Mitchell, to get back to the garden.

With original photography by the author.

Finding Woodstock is available through bookstores and online at Amazon, Apple Books, Barnes & Noble, Kobo and other retailers.