Fifty-three years ago, a group of high school kids calling themselves Shagg performed as the warmup band for the bubblegum hit machine The Ohio Express. What a contrast in musical styles, and whiplash for the audience, who’d come to hear the Top 40 classic “Yummy Yummy Yummy” and got Hendrix, Cream, and The Who. (“Yummy” hit No. 4 on the U.S. charts in April 1968. Although we eyed fortune and fame, our band never had a hit, or a recording contract. As Kurt Vonnegut would say, So it goes.)

The date was Saturday, June 22, 1968, the venue the Hullabaloo Club in Wind Gap, Pennsylvania, a pole building off a four-lane highway that looked like a World War II bivouac and felt the size of an aircraft hanger. Concrete floor, metal walls. I doubt anyone heard anything except a wall of noise. It certainly sounded that way from the stage.

Shagg’s original lineup consisted of Chip Decker on bass, Bob Dittman on rhythm guitar, John McAllister on drums, and me on lead guitar. The band expanded with the addition of Joey Raynock on keyboards, Gene Gorse on the Hammond B-3, and Ron Oney and Don Chase on vocals.

I wrote about that and other formative experiences of our generation in FINDING WOODSTOCK, which you can find at Amazon, Apple Books, Barnes & Noble, Kobo and other fine retailers.

As for the poster, yes, it is the original, on neon cardboard, with additional styling by Chip, the artist in the band. He added the flowers, the smoke streaming from the locomotive, and a girl with kaleidoscope eyes (it was the Sixties). Oh, yes, and the most important element that was missing from the original: our name.

It’s wonderful when readers are touched by something I’ve written. As Carla-Donna has given me permission, I thought I’d share her review of my first book, The Spirit of Swiftwater: 100 Years at the Pocono Labs. It chronicles the history of vaccines in the 20th century, through the stories of people who helped to eradicate smallpox, among others diseases. Here’s Carla’s history, and her take on the book. 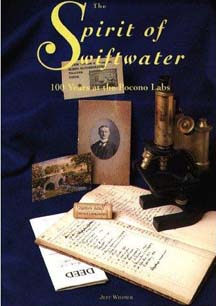 “I just purchased The Spirit of Swiftwater. The reason being, I was wondering if they were going to start work on a vaccine for the COVID-19 virus. When I looked them up, somehow I was introduced to your book. Long story short, I grew up in Stroudsburg, my home town, and had once applied for a job at Swiftwater during my college years at East Stroudsburg State College. Our friend, Pete Gerard, made it his career working there. It was nice to see his name in the book.
“My name is Carla-Donna (Holmgren) Martin. My father, Donald Holmgren, had a store in Stroudsburg, Donald’s Family Shoes, for many years.
“As it turned out, I became a registered medical technologist and retired from working 40 years in the hospital laboratory at Lancaster General Hospital, Lancaster, PA. My husband and I live in Lititz now and still visit Stroudsburg several times a year.
“Kudos to you for this very informative work on the Swiftwater Lab. Doc Slee was a household name growing up and this book was enlightening on his family and wonderful achievements and the ups and downs of the lab’s growth.
“In light of what we as a nation and the world are going through right now, hopefully a vaccine will be forthcoming from Swiftwater!”

A doctor wants to euthanize his terminal patients. A disgraced journalist wants a better job than flogging tours of crime scenes. The tour business is dying. There aren’t enough murders in this sleepy town to draw a crowd.

A good serial killer would help.

So begins Mr. Mayhem, the new crime thriller that fittingly goes on sale on Black Friday.

For a man known only as Brinker, the trouble starts when he’s fired for reporting his publisher’s DUI. Reduced to doing PR for a funeral home and its trolley tour of murder sites, Brinker despairs of ever restoring his pride, or his bank account. Compared to journalism, PR is degradation, an excuse to lie for a living. His addiction to prescription medication only fuels that rage.

When his doctor asks for a hand in dispatching hopeless patients, Brinker hires a wildly successful assassin named Angel, who brings chaos and fame to this backwoods town. But as Angel’s demands soar with the body count, Brinker wonders whether he’ll become the latest addition to his own list.

With Mr. Mayhem, I’ve tried to turn the suspense genre on its head. Fans of Elmore Leonard and Gillian Flynn will enjoy the double- and triple-crosses that give the book its dark edge. And readers who like a little sugar with their spice may come to think of Brinker as the king of the comic sex scene.

Mr. Mayhem is set in the snowy mountains of Pennsylvania, from whence I come. Published by Allusion Books, the novel is available in print and ebook formats through Amazon, iTunes, Barnes & Noble, Kobo,  my website and bookstores that place orders through Ingram. The audiobook version is due by the end of December.

What a way to end the year.

When I pitched a review of Peak Season to Bill Kline, he respectfully declined. Lehigh Valley Business, the journal in Bethlehem (Pennsylvania) he edits, doesn’t deal in fiction. But if I could find an except from the novel with a commercial theme, he’d run it.

And he did. (Always a stickler for readability, the subheads are his.) You can view the excerpt as a PDF and, in three weeks, the original online.

Bill and I go back. I worked with him when he served as copy chief of the Pocono Record in Stroudsburg, Pa. He created the paper’s first Sunday edition and made it a showcase. His content and design pushed the conservative newspaper into the modern world. During the early 2000, we both worked in the Valley. He served as a sports and Sunday editor at Allentown’s Morning Call  while I worked in public relations for an agency in Bethlehem.

LVB and I also go back. I wrote numerous articles for the publication when it was known as the Eastern Pennsylvania Business Journal. It’s now a diverse and colorful journal, online and off, led by an editor who isn’t afraid to stretch.