I came of age in the 1960s, absorbing the culture, learning the music, praying I wouldn’t get shipped to Southeast Asia. While my new standalone novel is fiction, Born Under a Bad Sign is based on a series of historical and personal events that played out in many of our lives, from the war in Vietnam to the fight against the Tocks Island Dam to the dicey gigs our band played to keep the dream alive. 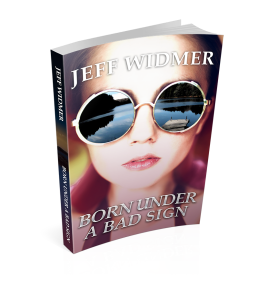 Titled after the 1967 hit by blues master Albert King, Born Under a Bad Sign introduces a pair of unlikely heroes, a Quaker and a rocker, Elizabeth Reed and Hayden Quinn—lovers, fighters and opposites in every way. It’s through their eyes that I’ve tried to capture the heady rush of those years. In the run-up to the 50th anniversary of the most famous rock festival of our time, we’ll look at the impact of the Sixties, at Woodstock and Vietnam, at the government’s plan to dam the Delaware River and the people whose homes and lives were demolished by that project.

And, above all, we’ll reconnect with the music. Join me as we revisit an era that shaped a generation.

Born Under a Bad Sign is available through bookstores and online at Amazon, Apple Books, Barnes & Noble and Kobo.